Cherry Ripe Truffles
I discovered Cherry Ripe bars, the Australian speciality back in October when I travelled from Cairns to Sydney. Sadly, they are not Vegan; I don’t think they are even vegetarian. But the concept is a sticky cherry coconut bar covered in chocolate. 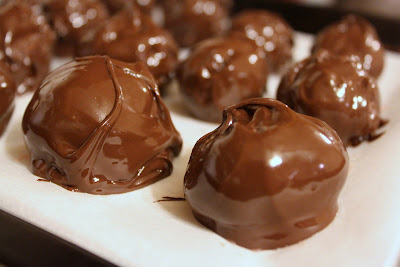 I found this recipe on The Kind Cooks Blog
http://thekindcook.com/2441/cherry-ripe-truffles/
I could have tried to make bars, but I think it’s more social (and less calories for me), if I make bite size treats. 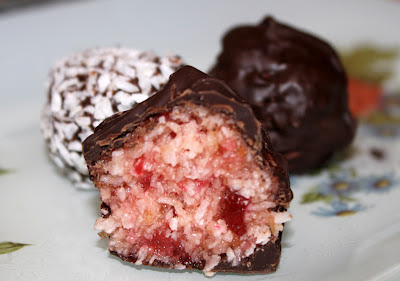 I used half traditional Glace Cherries and half Natural coloured (purplish)
2 x 100g of glace cherries (watch out for E120)
1 ¼ cup of desiccated coconut
4 teaspoons of golden syrup
200g of dairy free dark chocolate
In a blender mix the coconut, half the cherries and the syrup. My Cherries were really sticky so maybe this can be done without any extra syrup.
When you blend you start to see the mixture coming together naturally, so rolling them into balls is easy and a little sticky. Use a small spoon and roll between your fingers.
Make 15-20 balls, place them on a tray with covered with parchment paper.


Put them in the freezer while you melt the chocolate, about 10 minutes.
Rolling them in chocolate was a bit messy, but I found it easier when there was less chocolate in the bowl, so maybe melt less and top it up when you need to; chocolate chips melt fastest.
I found squishing it against the side of the bowl worked well.
Place them back on the tray. 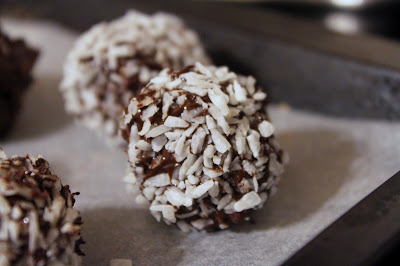 If you’re making coconut and chocolate covered, drop on a plate covered in coconut and use a spoon and finger to coat them evenly.
But them in the fridge and take them out about an hour before serving, depending on the outside temperature.
I would suggest these for a Christmas or birthday present to Vegan or non-Vegans.
I rolled half in chocolate and the other half in chocolate and then in coconut.
I'm going to make little boxes of 4 with 2 coconut rolled and 2 chocolate dipped, how cute!! 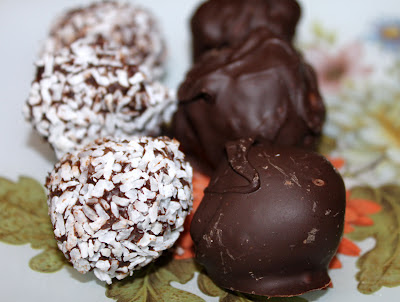 Everyone at my worked loved them and we’re surprised I had made them, but to be honest they are pretty easy to make, just blending, stirring, chilling and balling!

“Have you got any more of those truffles?”
To combat the truffle eating, I’m going to be picking a recipe from Appetite for Reduction soon.
Posted by SarahByng at 15:46